Six potential sleepers for the Warriors in a critical NBA draft

October’s NBA draft is expected to be one of the wildest in the past decade. With no generational prospects in this class, teams are likely to have quite different big boards.

This can be advantageous for a franchise like the Warriors, who are poised to have a top-five pick for the first time since 2002. The players they like the most might not be considered even lottery-caliber prospects to other teams.

If Golden State becomes infatuated with a player whom other franchises don’t regard nearly as highly, it would be wise to trade down in the draft to take its preferred prospect and get an asset in return. The Chronicle contacted league sources in recent days to identify six players who are probably higher on the Warriors’ board than most other teams.

Could one of the following half-dozen names be the type of sleeper prospect who could help vault Golden State back to contention? Though that answer won’t come for a while, the Warriors are making one thing certain: They’re not going to follow public consensus when it comes to their most important draft in nearly 20 years.

Saddiq Bey, SF, Villanova (6-foot-8, 215 pounds, 21 years old): Bey is widely projected to go in the mid- to late-first round, but sources suggest that some within the Warriors’ organization view him as an early lottery-caliber prospect. His combination of size, defensive versatility, basketball IQ and shooting range make him the ideal “3-and-D” wing in Golden State’s up-tempo system.

As the unquestioned leader of a top-10 Villanova team last season, Bey averaged 16.1 points on 47.7% shooting (45.1% from 3-point range), 4.7 rebounds and 2.3 assists in 33.9 minutes per game. When the Wildcats needed to make life difficult on the opponent’s top scorer, head coach Jay Wright matched him against Bey, who has shown a knack for staying in front of quicker guards.

The big knock on Bey is a perceived lack of upside. Having turned 21 in April, he was one of the oldest players in the sophomore class last season. It also doesn’t help that Bey lacks fluidity and explosiveness. Given that he’s only an average athlete, many teams see him as a helpful role player at the next level.

But according to league sources, some Warriors decision-makers believe that Bey is an NBA-ready wing with a chance to become a franchise building block. Whether that would be enough for Golden State to use a top-five pick on him remains unclear. If the Warriors decide they must have Bey, they’d probably be best served trading down to the late lottery.

Devin Vassell, SG, Florida State (6-7, 195 pounds, 19 years old): Vassell might be the best candidate in this draft class to help fill the defensive void the Warriors have felt since the loss of Andre Iguodala. Armed with a 6-10 wingspan, he is a master at getting into passing lanes and forcing turnovers.

His lateral quickness, high motor and textbook jumper should earn Vassell a spot in an NBA rotation as a rookie. Though Andrew Wiggins showed in a limited sample size with the Warriors this past season that he can fluster some of the league’s better wings, Vassell is already a more reliable on-ball defender.


What makes him particularly special on that end is his court awareness. An elite help-side defender, he often assists teammates before they’re even aware they’re in trouble. Scouts expect Vassell to guard at least three positions — point guard, shooting guard and small forward — with ease at the next level.

Though he has plenty of room to improve on offense, he projects, at worst, as a dependable spot-up shooter in the NBA. Last season, while facing a slew of double-teams as the Seminoles’ top option, he shot 41.5% from 3-point range.

Like Bey, Vassell isn’t considered to have the upside of some other potential lottery picks. His issues creating his own shot, playing off the dribble and getting past defenders on drives to the rim have many scouts penciling him in as a defensive-oriented wing who projects as a longtime starter, not necessarily an All-Star, in the NBA.

But per a league source, the Warriors like Vassell’s “3-and-D” potential enough that they’d consider taking him in the bottom half of the top-five — about a half-dozen spots above where he sits on most mock drafts. He also could be an option if Golden State decides to trade down to the mid-lottery.

Patrick Williams, SF/PF, Florida State (6-7, 215 pounds, 18 years old): Williams hasn’t received as much buzz from scouts as his college teammate, Vassell, but the Warriors are believed to think Williams has lottery potential. This is someone with surprisingly few weaknesses for a player who doesn’t turn 19 until August.

With a 6-11 wingspan, strong build and solid shooting mechanics, Williams projects as a quality NBA rotation player who has a chance to be far more. The problem is that most of his scouting reports deal more with what he theoretically could become than what he already has proven. 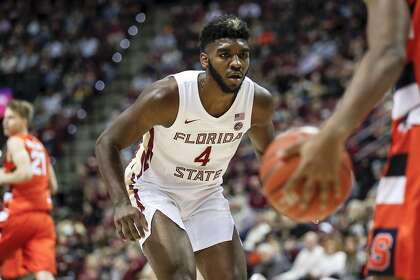 As the youngest player on an experienced Seminoles team, Williams was a complementary option who found his points within the flow of the offense. Teams are still trying to identify his bankable NBA skill. Williams showed flashes of his defensive potential last season, but Vassell tended to get Florida State’s toughest assignments.

It’s unlikely that the Warriors would use a top-five pick on a prospect with such question marks. But should Golden State trade down to the late lottery, Williams’ intriguing skill set might be enough for it to give him a hard look.

Jalen Smith, PF, Maryland (6-10, 225 pounds, 20 years old): Smith fits the prototype of a modern NBA big man who can run the floor, thrive in pick-and-rolls, throw down alley-oop dunks, block shots and hit catch-and-shoot jumpers. For much of the final two months of the season, he was arguably the most dominant player in college basketball.

Though most mock drafts have Smith going in the latter half of the first round, the Warriors are believed to view him as a potential late-lottery pick. It’s not difficult to envision him immediately contributing to a 2020-21 center rotation expected to include Marquese Chriss and Kevon Looney. 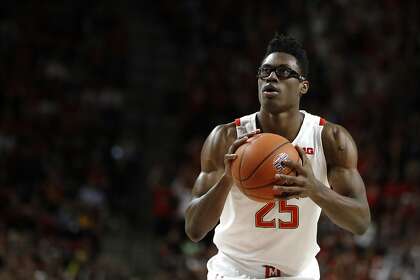 The question is whether he can become more than a serviceable rotation player at the next level. Smith has gained 25 pounds of muscle in his two years at Maryland, but he still could struggle on the block against some of the NBA’s stronger centers. His offensive repertoire also will need to expand if he hopes to be a starting-caliber player.

The Warriors appreciate Smith’s physical tools, but they likely wouldn’t consider taking him unless they traded down to the mid-first round. Smith would hardly be a bust at that stage of the draft if he carved out his NBA career only as an effective role player.

Mamadi Diakite, PF, Virginia (6-9, 230 pounds, 23 years old): Diakite is widely projected to go in the late second round or undrafted. But according to league sources, some within the Warriors’ organization view him as a first-round pick.

In many ways, Diakite fits what Golden State wants in a role player: someone with a winning pedigree who learned under top coaches, understands how to fill different holes on a team and is defensive-oriented. After three years as a complementary option for the Cavaliers, he excelled as the go-to scorer this past season, shooting 36.4% from 3-point range and leading Virginia to a 23-7 record. 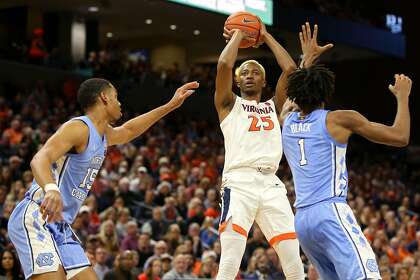 But given that Diakite doesn’t necessarily have a standout NBA skill on offense, he’ll need to find his footing at the next level as an interior defender. The Warriors might see enough value in him that they could consider him if they end up in the late first round.

And if Golden State holds onto at least one of its two late second-round picks, perhaps Diakite would be available. He has enough of a track record that the Warriors could sign him to a guaranteed deal before seeing him in training camp.

Borisa Simanic, PF, Serbia (6-11, 209 pounds, 22 years old): Simanic isn’t on most mock drafts, but he is believed to be one of the Warriors’ favorite international prospects in this class outside of Killian Hayes, Deni Avdija and Theo Maledon. Simanic’s size and catch-and-shoot ability would make him an intriguing option for Golden State late in the second round.

Though Simanic has been on NBA teams’ radars since his appearance at the 2017 Nike Hoop Summit, he has yet to command significant playing time for his team in Belgrade. There is reason to believe, however, that he could develop into a serviceable role player at the next level if put in the right situation. His fluidity and shooting stroke are rare for someone his size. 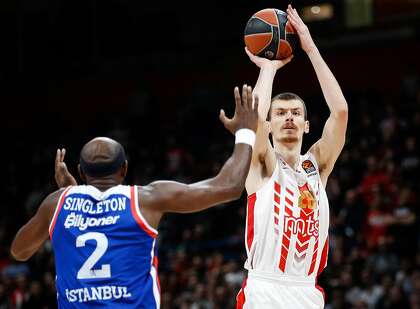 Given that the Warriors probably won’t be able to have both of their upcoming second-round picks on the roster next season, they could leave him overseas for a year or two to see how he develops. This is a low-risk, high-upside path for a team eager to stockpile young, affordable players.