As much as we’d like to narrow down prospects in the Knicks’ range, the NBA Draft Lottery still needs to happen, and there is a wild range to New York’s options.

Recent reports say that the wheels to resume the NBA’s regular season are in motion. For the Knicks and their fans, all that means is that New York is one step closer to the draft lottery. With the Knicks 9.5 games out of the playoffs and just 16 games left on their schedule, it’s best for New York to start planning for the 2020 NBA Draft.

The draft lottery can place the Knicks at any spot inside the top 10, except for five. New York’s odds for each pick is as follows:

With so many places the Knicks’ own pick could end up, and the other two picks at their disposal (currently picks 27 and 38), New York can take their draft strategy in multiple directions.

Let’s look at five draft lottery simulations from Tankathon.com and consider the Knicks’ options in each one.

Sim no. 1: Breaking Even 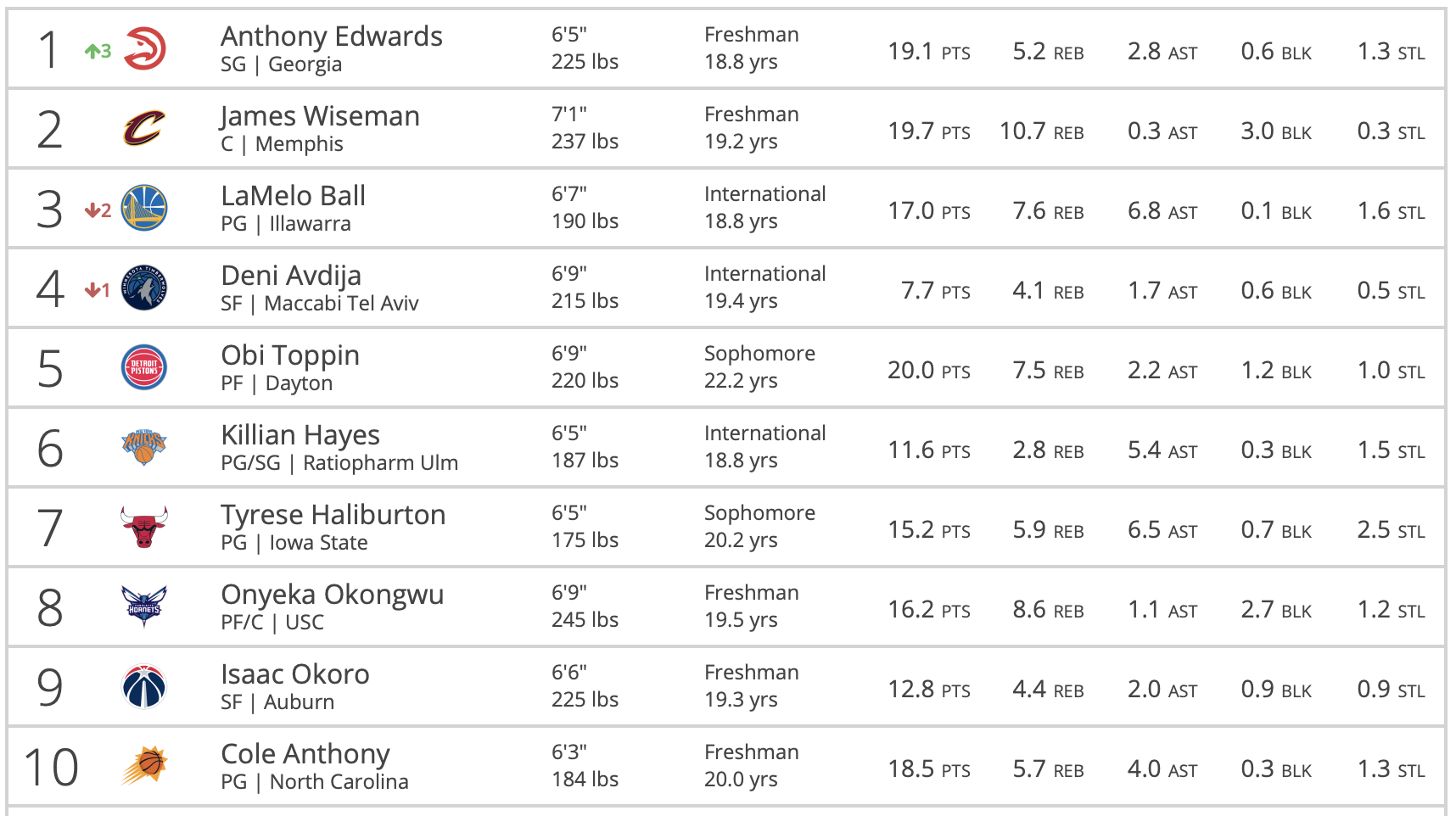 In the first simulation, the Knicks land right where they’re projected. They are presented with two options that could solve their perennial point guard problem: Killian Hayes and Tyrese Haliburton. Both guards stand at 6-foot-5 and could help the Knicks on both sides of the ball.

Hayes, a product of France who last played for German club Ratiopharm Ulm, has upside as an offensive centerpiece. His playmaking is impressive and he’s flashed some mature scoring moves, namely a stepback triple. He most likely won’t be a Frank Ntilikina–type on-ball defender, but he is an attentive and instinctual off-ball defender.

Haliburton, an Iowa State product, has the potential to be a quintessential floor general. He’s a playmaking extraordinaire with great instincts on defense. His seven-foot wingspan coupled with those instincts should allow him to be a strong defender. Although he isn’t projected to be the first option as a scorer, he showed great efficiency in his two collegiate years, shooting over 50% from the field and 40% from beyond the arc in both seasons.

Trading up a few spots is also an option here. The Knicks have two more picks in this draft and five first-round picks in the next three drafts—their own three picks and two from the Mavericks. If New York President Leon Rose has his heart set on a prospect he thinks will be taken before the Knicks’ pick, using some combination of these picks to move up could pay off. 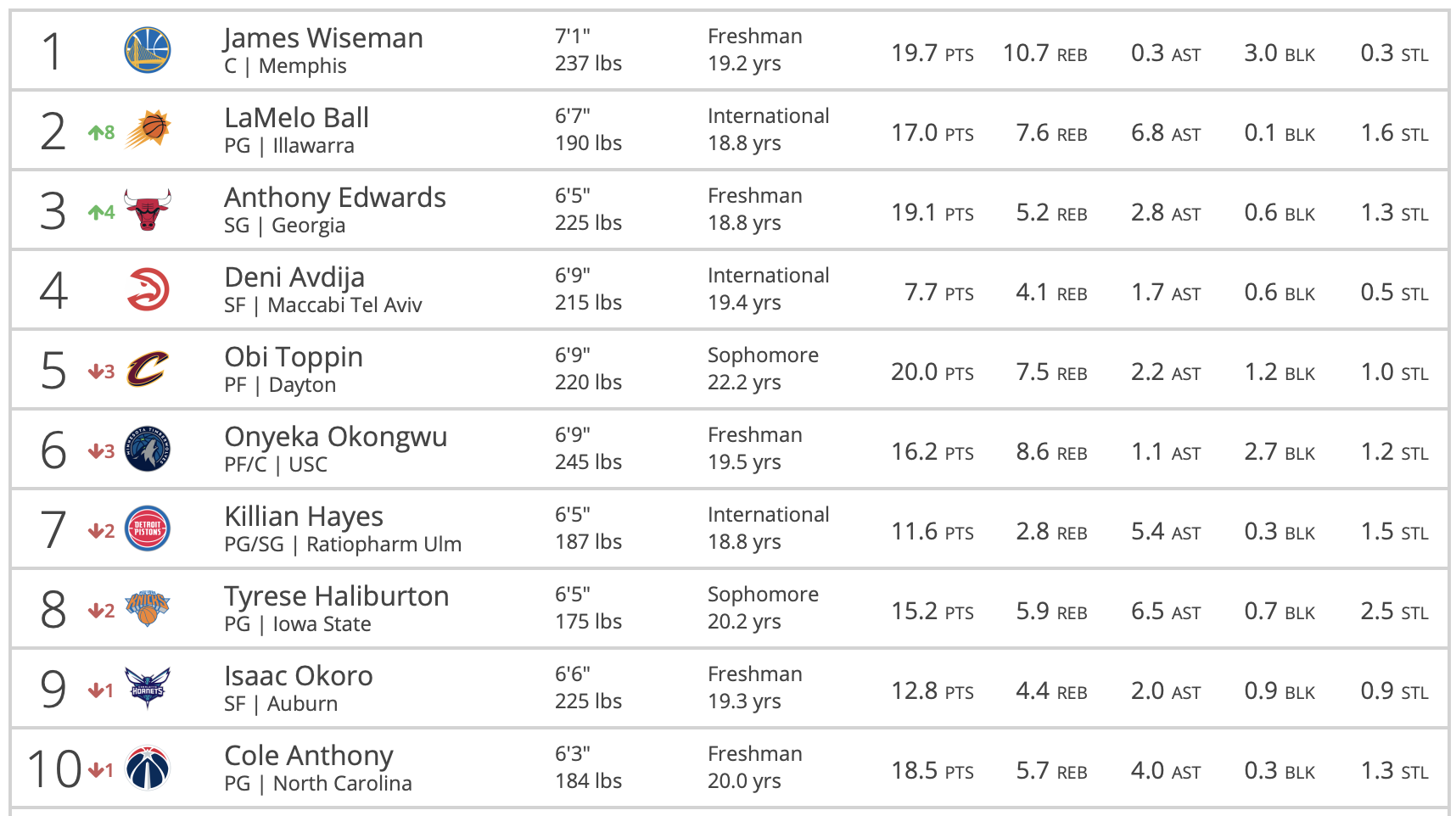 Following in the footsteps of last year’s draft lottery, this sim drops the Knicks’ pick down by two slots, this time putting them at eighth overall.

The aforementioned Haliburton is a strong option here. So would two wings that could boost the Knicks’ defense in Auburn’s Isaac Okoro and Florida State’s Devin Vassell.

Both the 6-foot-6 Okoro and 6-foot-7 Vassell project to be impactful, versatile defenders at the next level. They’re both energetic, tenacious and smart. They boast wingspans of 6-foot-9 and 6-foot-10 respectively.

Offensive value separates the two prospects. Vassell has real potential to be a good floor spacer. He shot 41.5% from deep on 4.9 attempts per game. Although he’s mostly a spot-up shooter, Vassell has flashed some solid shot creation off the dribble and in pick-and-rolls.

Meanwhile, Okoro isn’t an inspiring shooter. Instead, he’s a high-flying slasher. He displayed good body control and a nice touch on layups when driving to the hoop, as well as dexterity when driving by defenders. Okoro is also a smart passer, making snappy passes to open rollers and shooters.

Vassell’s shooting gives him obvious value on offense, and it would help the Knicks in an area they desperately need help in. How Okoro will help an NBA offense is less clear. His slashing and cutting abilities might not be enough for him to be an offensive focal point, especially with New York, one of the worst three-point shooting teams in the league. 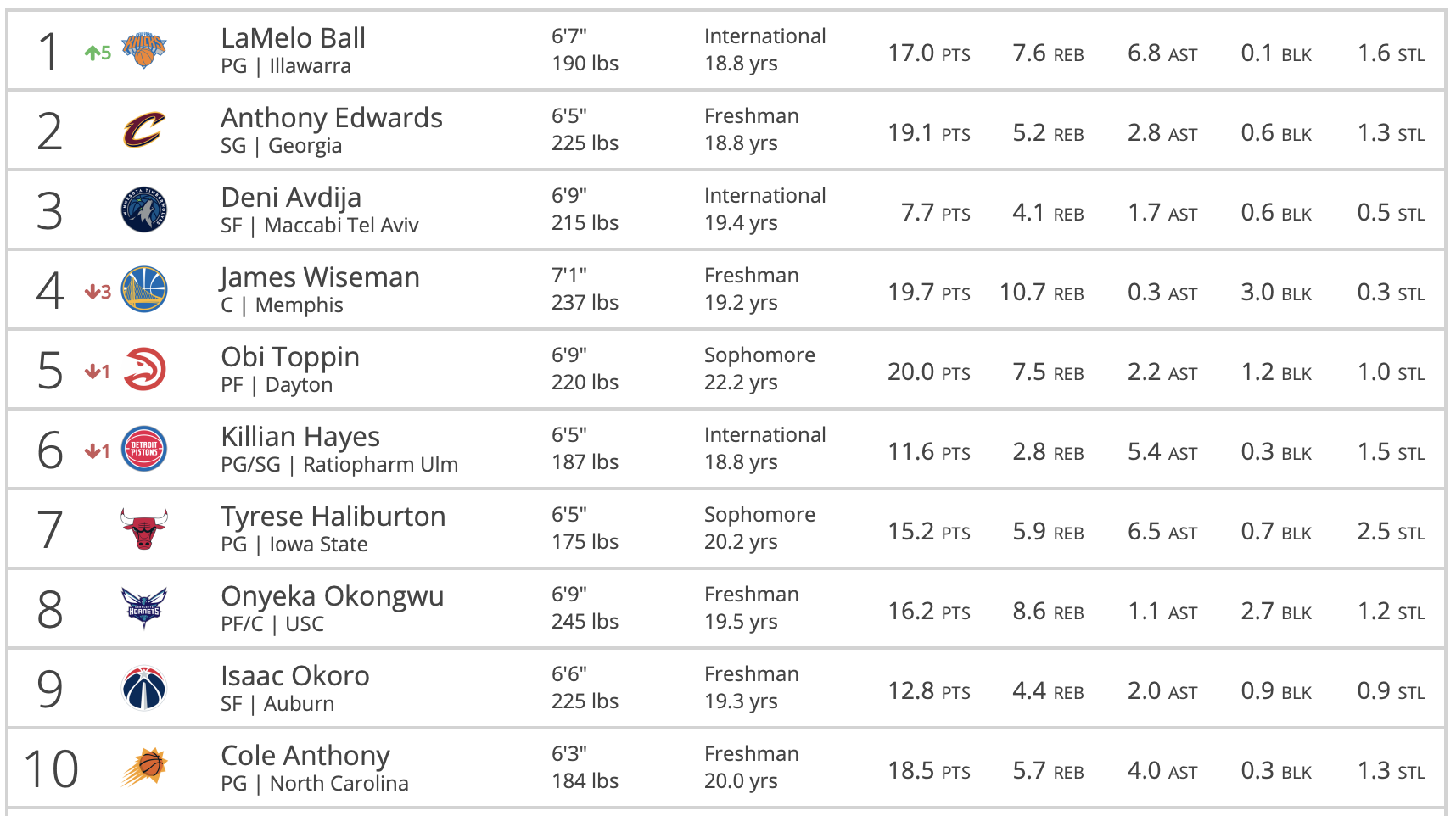 The Knicks being the only team to move up in the lottery to land the first overall pick would be a delicious reward for the past few years of bad lottery luck and even worse on-court performances. Highly touted prospects LaMelo Ball and Anthony Edwards would be ripe for the picking with the first overall choice.

Ball is one of the most exciting prospects of this year’s draft class. Just like his older brother, Lonzo, ‘Melo flaunts tremendous playmaking abilities. The 6-foot-7 Ball uses his vision and creativity to perform spectacular passes to teammates, especially in the fast break.

Despite his advanced feel for the game, Ball leaves a lot to be desired with his inefficient scoring and inconsistent defense. Still, he has shown slick handles and finishes at the rim and impressive defensive abilities when he locks in. If he can harness his length and quickness and sharpen his decision making, he can blossom into a star.

Edwards also flashed some star potential in his lone collegiate campaign. He displayed extensive scoring abilities, mixing smooth jumpers off the dribble with powerful dunks and majestic layups. His athleticism and measurements—standing 6-foot-5 with a 6-foot-9 wingspan—could help him develop into a valuable defender.

What hinders Edwards’ promise is his decision making and effort. His shot selection needs improving and he isn’t a strong playmaker, though he isn’t a lost cause in that department. He also plays with inconsistent effort defensively. Still, he has enough upside as a bucket-getter to be in consideration for the top pick.

Sim no. 4: The Nightmare 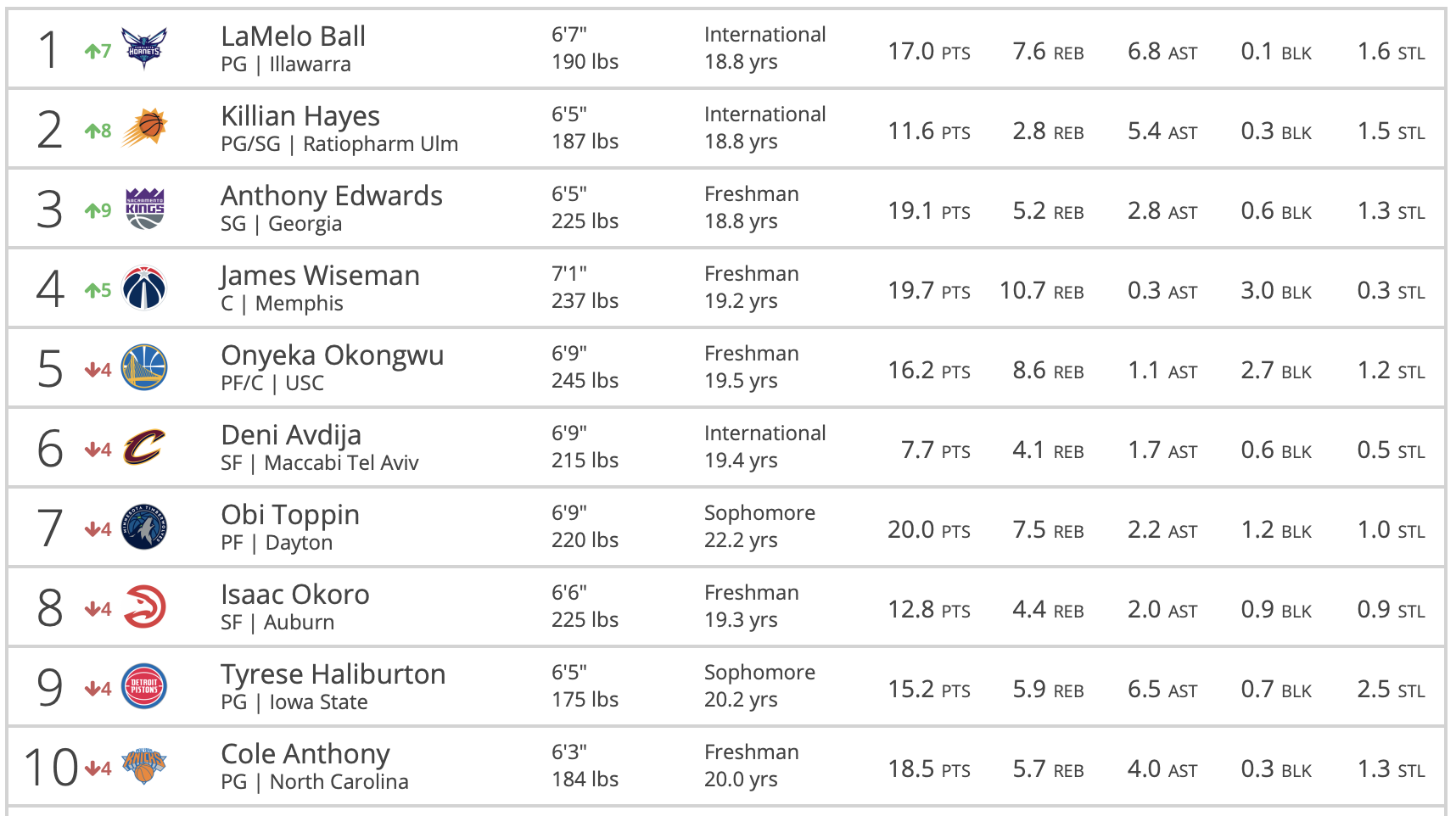 In this doomsday scenario that only has a 0.1% chance of occurring; the Knicks plummet four spots.

Cole Anthony’s draft stock took a similar plunge over his lone season as a Tar Heel. Once thought to be the cream of the crop, Anthony put up a rather disappointing season headlined by inefficient shooting (38.0% from the field). North Carolina’s dilapidated roster didn’t help the 6-foot-3 point guard much, and he missed nearly two months in the middle of the season due to an ankle injury.

Anthony, son of former NBA-er and Knicks point guard Greg Anthony, still displayed promising shooting abilities, was an active defender, and had outside factors that possibly hampered his progress. In a more stable environment (which, in all honesty, the Knicks have not been as of late), Anthony could thrive.

Vassell would also be available here, as would a bevy of intriguing guards like Tyrese Maxey, Kira Lewis Jr. and R.J. Hampton.

Trading down makes the most sense for the Knicks if their pick falls to no. 9 or 10. Draft gurus are claiming that this draft class is weak so moving down a few spots while adding more draft capital makes sense.

In the 2017 draft, the Kings sent the 10th overall pick to Portland for picks nos. 15 and 20. The Celtics—whose three first-rounders are currently projected to be picks 17, 26, and 30—are the only team suited to offer a similar package. Regardless of which specific picks are offered, trading back to later in the first round while adding another pick(s) should be a real option for New York. 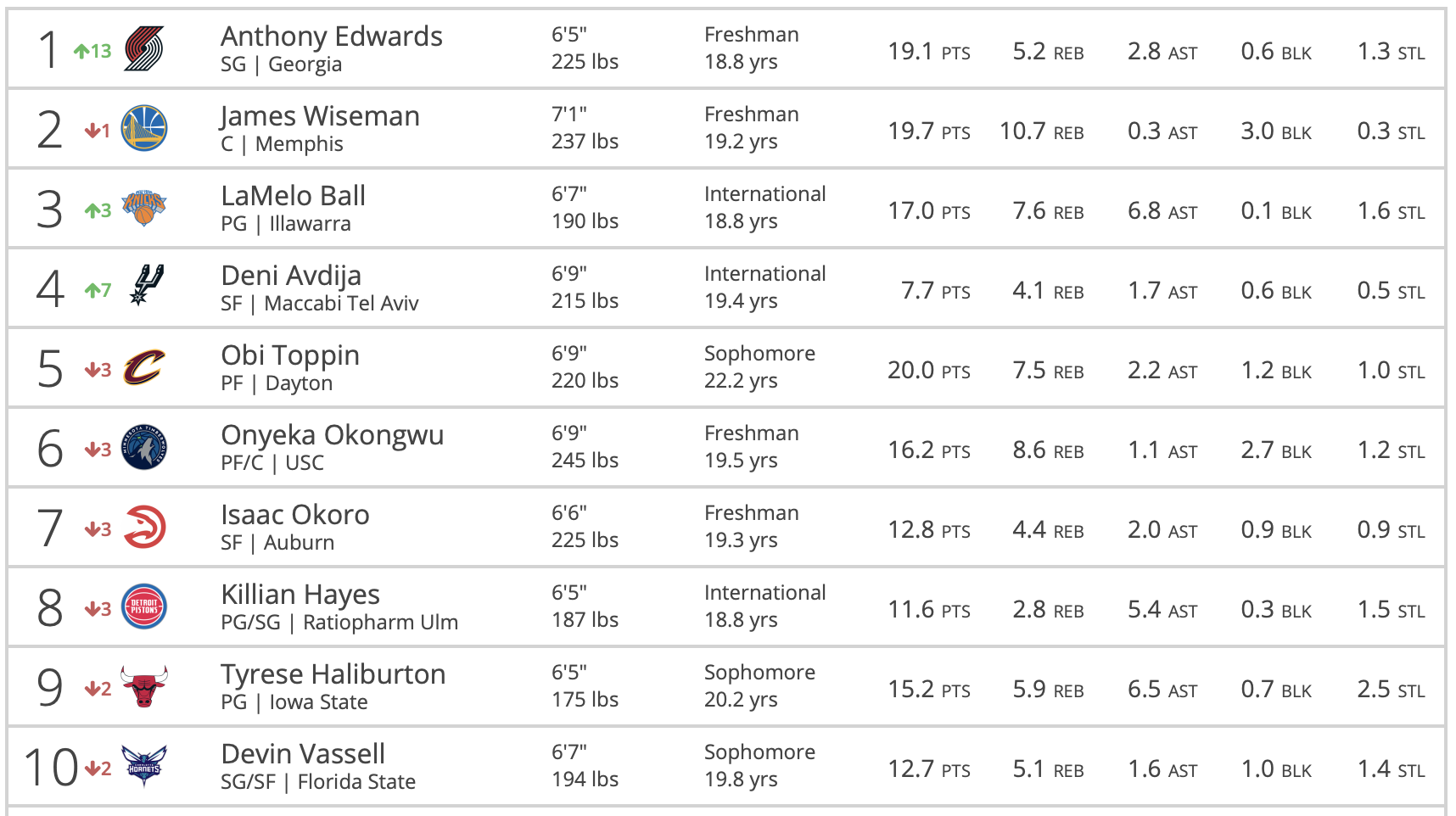 In this simulation, Portland defies the odds and lands the top pick. San Antonio tries to retain normalcy by drafting a foreign prospect. Meanwhile, the Knicks move up three spots and receive the third overall pick.

Ball would be a great pick here and so would Deni Avdija. Don’t let the lackluster stats in the image above discourage your judgment on the 6-foot-9 forward from Maccabi Tel Aviv. His playmaking and ball-handling are impressive for a youngster of his size. He’s a smart player that makes good reads on offense and rotates well on defense.

Avdija’s lack of athleticism and streaky shooting are the main areas of concern. He might never become a jaw-dropping athlete, but if he can fine tune his jumper, he can at least become a dangerous offensive weapon.

Trading up is also an option here. The Knicks have plenty of draft capital for the near future. Since it’s essentially impossible for them to field a team with every single draft pick they have, it makes sense to use some of it to move up for a player they really like.

»READ: The Knicks have creative wiggle room with their pair of first-round draft picks

»READ: How will the Knicks grapple with taking a big in the draft?

»READ: What should the Knicks do with their late draft picks?